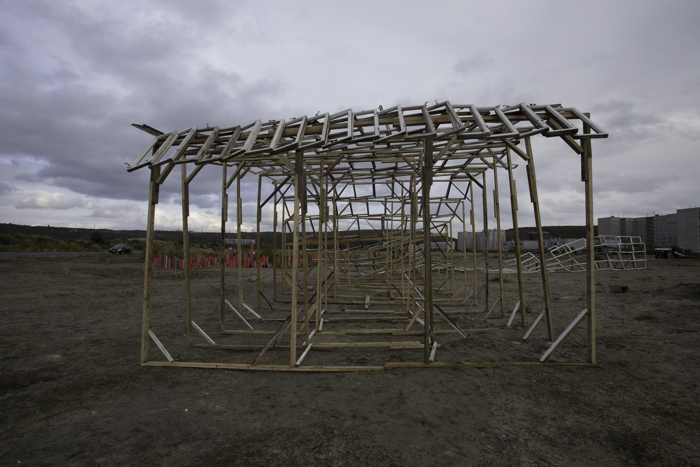 SITE-SPECIFIC, INTERACTIVE PROJECT IN THE RUSSIAN ARCTIC «THE WAVE AND THE PIT»

These art pieces were created to bridge the narratives of the contemporary and the historical within the city. It consists of two installations, The Wave and The Pit.
The Wave is the separate object, which is constructed from repurposed window frames from the Nikita Khrushchev’s period. The interactive installation The Pit is created from the foundations of buildings that were never completed.
The viewer is invited to enter and wander among these frameworks that offer no beginning or end. They exist between things, endlessly establishing connections. By entering this space the spectator forms new narrative of public and private, past and present.
The duality of the time and the physical space is questioned in these two installations through the mixture of the materials, forms, colour and space. There is a nostalgic remembrance of the collectivism that will not be possible without the contemplation of the individuals today.
The aim of the creation of such art works is to create an experience within the aesthetics of the objects seen.
The project is the starting point for the creation of an open-air gallery in Murmansk and in the region.

Pit — an interactive installation  situated  on the new men made location, which was created for development of future city with improved architecture  with perestroika. Few apartments were started and been left on the stage of the construction of the basement.  During 17 days from 5 to 40 volunteers, local inhabitans, organizers, students of local art school  everyday were transformed the place from non-functional to the new point of interest. During the creation of this work were done many useful things such as garbage collection, glass collection, excursions, introducing visitors with public art and contemporary art, receiving of support local inhabitants, common joint of materials. While creating installation a huge role played selected color scheme: on the one hand, and all the pillars of color were painted at the request of the people, on the other hand, red, reflecting the unity and similarity. Place turned into a playground for some time.

Installation «Wave» will function as a stand-alone art object and complements «Pit» conceptual and educational pieces. The old used windows connected  schematic cells and represented a form resembling a wave, but not having  beginning and end. Heavy frames were attached to the visually fragile structure from new material. Despite the severe climatic conditions of the Far North, it stood for the whole winter. «Wave» is the separation of public and private, connection modernity with historical significance of the Soviet Union. In the work present reminder of gone collectivism impossible without thinking about  soviet individualism.

The original project has never been realized and remained a utopia. The place functioned as a witness of the dramatic changes in the russian history. The produced art works reflect the nostalgic memories about the collectivist time and attempt to observe the individualist today.

The work consists of the existing rests of the not completed concrete fundamental from the 1990s. The pit has existed for 20 years and locals used it for gathering garbage, as well as a meeting place for disadvantaged teenagers. The construction is grounded in a pit, but is moving upwards.
The color solution plays an important role in the installation. From the Western side the columns have been painted red and differ slightly in size and hues. From the Eastern side, every participant could choose the individual color they prefer to paint, and the color scheme is more heterogeneous.
The pictures document the final result of the interactive process, where from 5 to 40 per day for 17 days local teenagers and grown-ups took part. After having been shown on TV, the site has been popular for walking, taking pictures and other events. The site attracted people from other towns, and from Murmansk.

THE SOCIAL PART OF THE WORK

Local people concerned about the construction. — «It would be burneThe town of Kolad and broken»

Invitations to local to take a part in the creative process

Resources of the materials

The paint 127 originally made for the army boat, brought by the local person 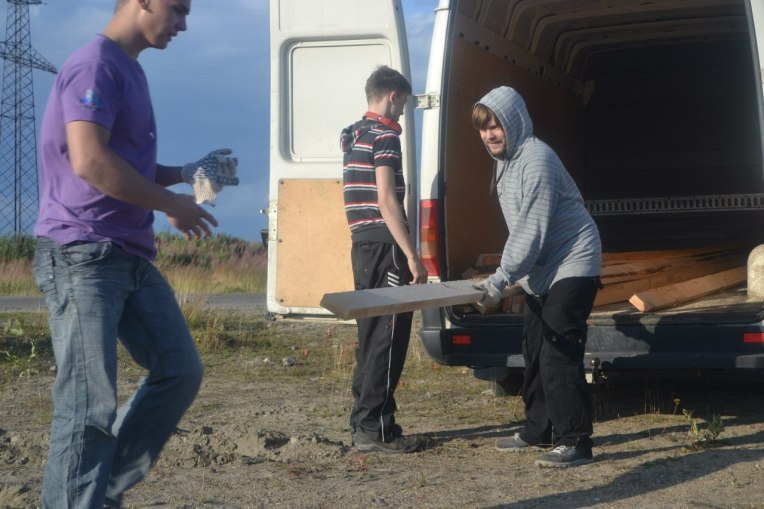 Partly, wood supplied by the local businessmen to support Art in Kola

The project involved several generations of the local people

Parents wrote the notes stating that they allows their children to clean up the
garbage and to paint the pillars
Participants were working night and day, regardless of weather conditions 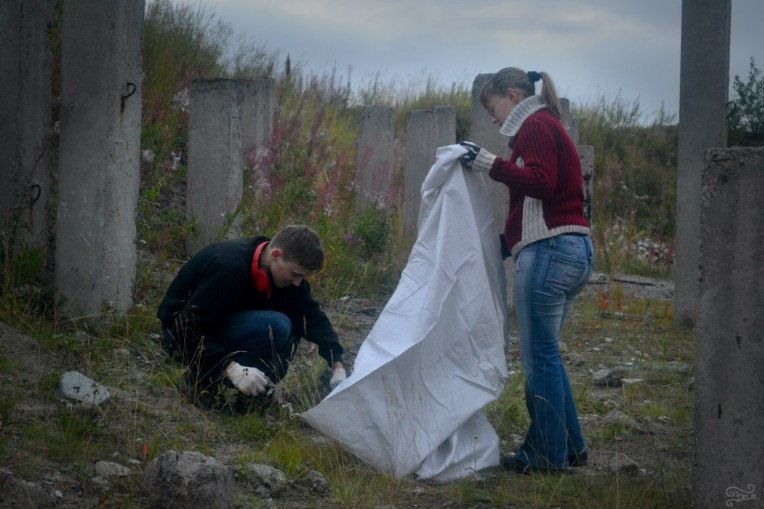 Friends and couples cooperated in a new situation

Independent and controlled chose of color 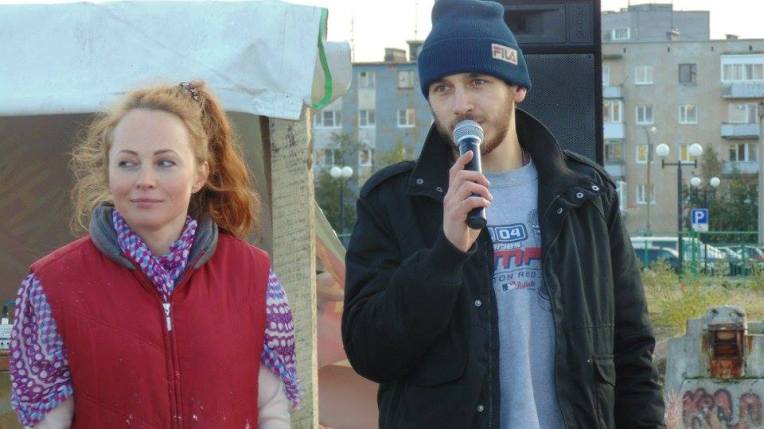 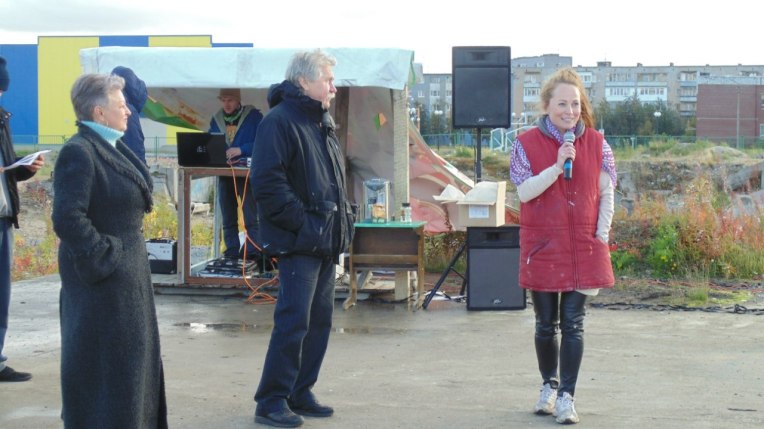 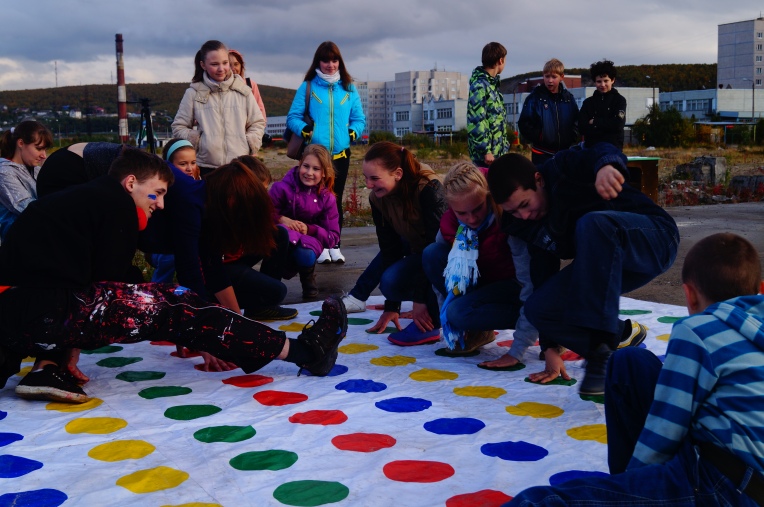 The place changed it function and become a playground for the local children
Is attracting the tourists, local people of different age to walk around, weddings, photo
session and more 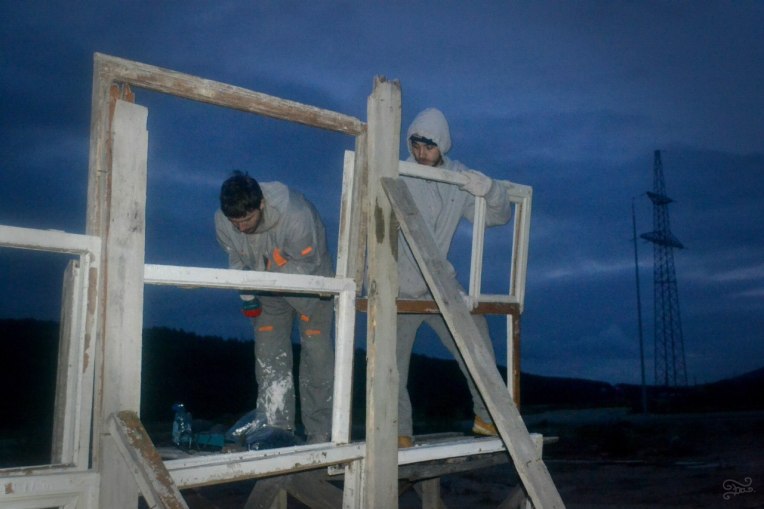 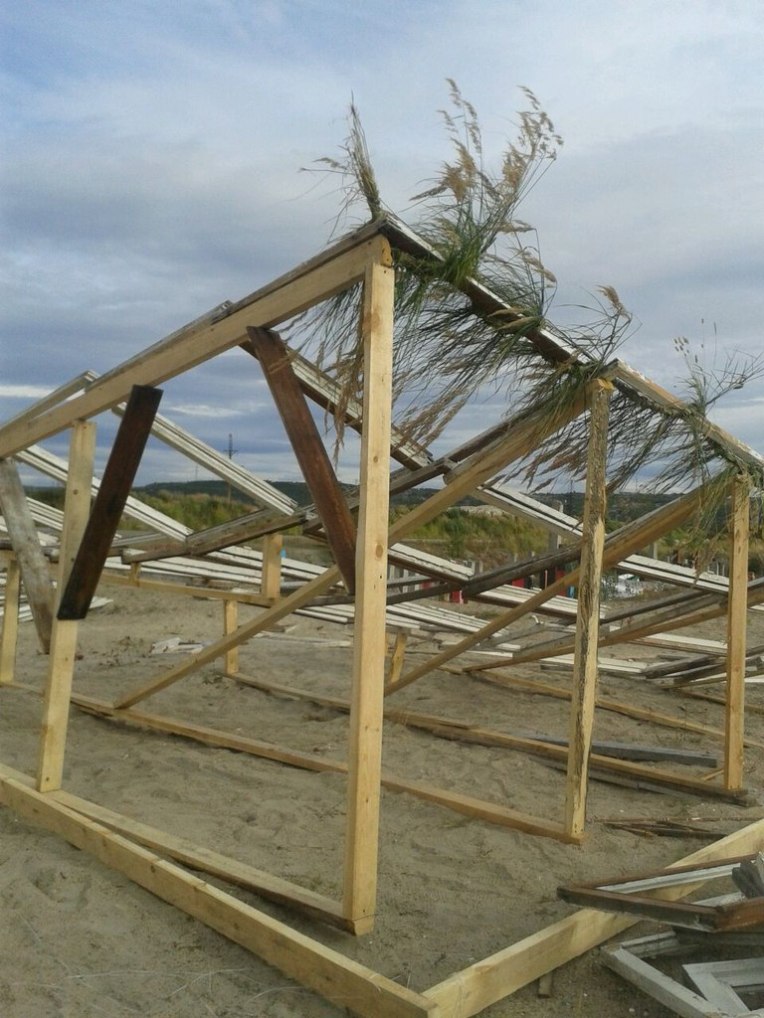 SEE YOU NEXT TIME!